The natural toothy surface will hold multiple layers of pastel without the need for fixative, allowing the velvet bloom and vibrant colour of pastel to be preserved. Erasing is also easy with Colourfix™ - simply lift off excess pastel with clear adhesive tape, brush off with a dampened or dry brush, or use a pencil eraser. Alternatively, errors can be overpainted or areas touched up with the matching colour of Art Spectrum Colourfix™ Primer. The tough, toothy surface can be sanded, scrubbed, soaked and reworked over and over
​
Information taken from the Art Spectrum website:-
​ART SPECTRUM/COLOURFIX
Ideal for: Acrylics, inks, silverpoint, oil pastels, gouache, watercolours and dry media such as soft pastels, charcoal and pencils
Printed on 300gsm hot press watercolour paper and with its dense, lightfast colours and fine deep tooth. ​ A good choice for Coloured Pencils

For many years I worked on a heavyweight card for all my coloured pencil pieces, usually around 220gsm. The reason for this was that heavier papers allowed for more layers and the thickness supported heavy applications, as I built up the layers. A fellow artist from New Zealand, trialled the Colourfix paper for her soft pastel work, and found it useful so sent me a couple of sheets to try too.  I decided to try it with my own soft pastels but found it a little heavy and put the spare sheet away with no plans to use it again. A couple of years later, I came across that spare sheet of Colourfix and decided to try my coloured pencils on it as it is also suitable for CP's too. I tried it out and really enjoyed it and as I have a preference for working on coloured paper, felt this was the perfect option, particularly for larger work.

Below are 2 very rough images of a Tiger's eye, both done with the same pencils as each other, but the right has been completed on the 220gsm cream card and the left on the 'Sand' tone of the Colourfix paper. 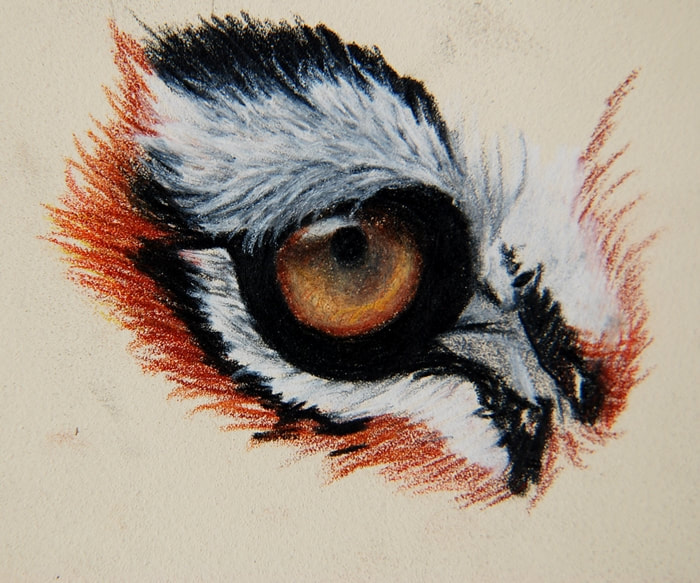 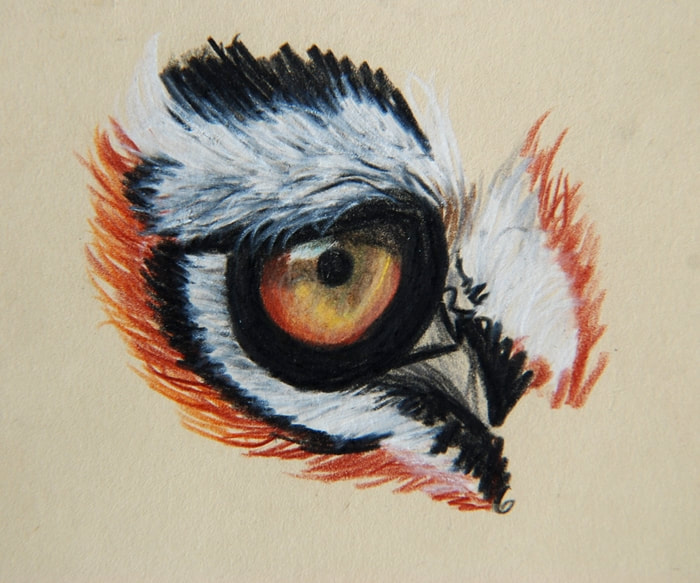 220gsm SMOOTH PAPER
You can see that the details on the Tiger's eye on the right appears smoother than the colourfix one, this is an effect I like to recreate and is the reason I have always used this weight of paper, however, the Tigers eye on the colourfix paper to the left, allows multiple applications of colours onto the paper, allowing whites to work into blacks, an impossible task with coloured pencils on most papers, but very important when you are creating a beautiful animal such as the Tiger which has a lot of whites,blacks and terracotta tones very close together.

The downside of the Colourfix, due to the coarseness of the surface, it wears pencils down a little quicker than normal, in my opinion, this is a negative I can live with as the vibrancy of colours you get from coloured pencils are made even more vibrant by working on the Colourfix paper, which I have found is lacking on some highly recommended papers such as the USA's CP Artists favourite paper 'Stonehenge' - personally, for me, I just found it far too soft.
Below is another Tiger I begun a while back in coloured pencils on white Colourfix.  The right side shows the first layers of colour that all my pencil portraits begin with. The left side shows progress after multiple layers. I also used fixative in between layers, as it extends the application, allowing far layers than would be possible without it, and as an added bonus, it can create a textured surface at the end.

The effectiveness of dark paper

This Snow Leopard was produced on black Colourfix. Using a dark base for light coloured subjects such as this Snow Leopard, cuts down the amount of layers required to create the realism in your work. Although coloured pencils are usually applied light to dark, with a dark base, you will work mostly with the lighter tones as the base creates ready made shading. The first image below has only been covered with one or two colours, and the effects are immediate. The black of the paper can still be seen in tiny amounts on the final portrait, which allows the pale tones to appear far brighter than they would on a lighter, base paper. 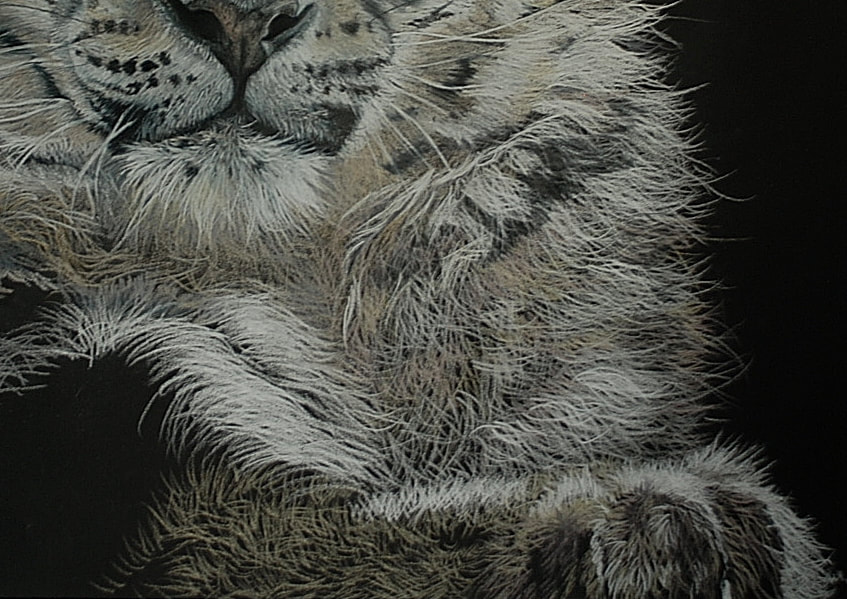 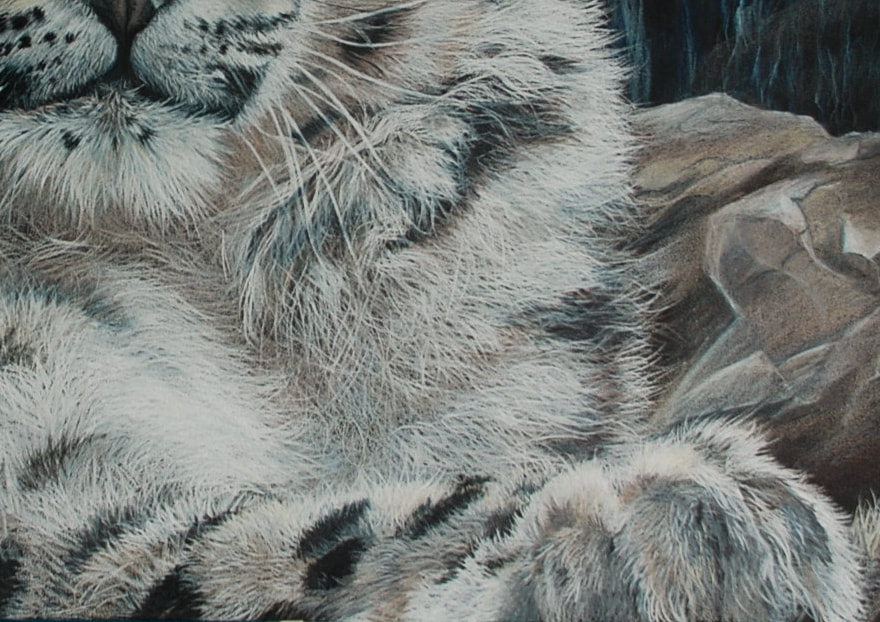